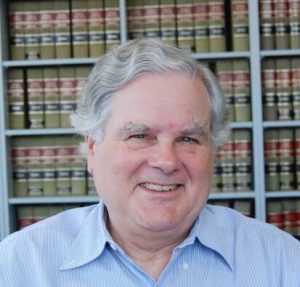 Michael B. “Mike” Trister (1941-2018) was born in Montreal to Canadian parents living in Princeton, New Jersey, where his father was in a post-doctoral program. When the family decided to remain in the U.S., Mike became a citizen here and spent most of his childhood in Elizabeth, New Jersey. He returned to Princeton for college and went on to graduate from Yale Law School.

Mike then embarked on a singular mission that propelled his career as a people’s lawyer. A new progressive dean at the University of Mississippi Law School recruited Mike to teach and develop a legal services program designed to serve the poor and provide clinical training for law students. The aggressive legal work Mike and a colleague conducted, including filing a school desegregation suit, prompted resistance from the state’s political hierarchy. Bowing to pressure, in 1968 the University terminated its relationship with the program and refused to allow Mike and his colleague to teach at the law school if they continued with the program.

The University’s justification was that faculty members could not have outside employment, but in fact others did so without interference. Mike and his colleague sued Ole Miss, and won; as the U.S. Court of Appeals for the Fifth Circuit concluded: “It appears clear that the only reason for making a decision adverse to appellants was that they wished to continue to represent clients who tended to be unpopular. This is a distinction that cannot be constitutionally upheld.” Trister v. University of Mississippi, 420 F. 2d 499 (1969).

By this time Mike was working full-time as the first Executive Director of North Mississippi Rural Legal Services. He transformed poverty law practice in Mississippi, focusing particularly on advancing the civil and economic rights of African Americans in the state. Mike not only oversaw school desegregation cases, but also successfully defended NMRLS lawyers when local sheriffs tried to jail them. They viewed Mike as their “guardian angel.”

Mike moved to Washington, DC in 1970 to join an organization started by a Mississippi colleague, civil rights lawyer Marian Wright Edelman. In 1973 this organization became the Children’s Defense Fund, which Mike later served as Vice President and General Counsel until starting his own law firm in 1976, and he continued to represent CDF for the rest of his career.

In 1988, Mike co-founded the law firm Trister, Ross, Schadler & Gold. For nearly 30 years he counseled progressive advocacy, labor, charitable and political organizations as well as grant-making foundations on tax, campaign finance, lobbying and general nonprofit corporate matters – and, many, many of these clients “tended to be unpopular” in some quarters. Working with broad-reaching clients like the Alliance for Justice and the AFL-CIO, Mike created vital guidances about lobbying and election law that circulated widely among both lawyers and activists. Mike taught strategies to maximize advocacy, and he defended clients in lawsuits and audits.

Central to Mike’s vision of the practice of law was the importance of serving and supporting social, economic and political movements. He routinely did so steadily and meticulously, out of the limelight, enabling his clients to pursue their activism and goals with legal security. Countless grassroots organizers and progressive leaders across the country have Mike to thank for their knowledge of the laws they navigate in order to press for social and political change.

Throughout his life, Mike also sought to improve the legal profession – through his example, his teaching at the University of Mississippi, American University Washington College of Law, and the University of Maryland School of Law, and his service as Chair of the DC Bar Legal Ethics Committee and the DC Bar Rules of Professional Conduct Review Committee. Mike’s wife Nancy (“Duffy”) Duff Campbell was co-founder and Co-President Emerita of the National Women’s Law Center.

In June 2018 the Alliance for Justice honored Mike with its Lifetime Achievement Award for his “courageous dedication to social justice advocacy.”
Source: https://tristerross.com/michael-b-trister/

My good friend, Mike Trister, died in October of this year. While many current leaders and advocates in civil legal aid may not know of Mike, he was a critical leader and advisor in the legal services movement for over 50 years. These remembrances are taken from his Memorial Service and my own work with Mike.

When he graduated from Yale Law School in 1966, the University of Mississippi School of law recruited him to teach and develop a legal services program designed to serve the poor and provide clinical training for law students. Mike’s aggressive and effective legal work, including filing school desegregation suits, prompted criticism from the state’s political hierarchy that led first to the ouster of the program from the law school and then to his termination from the faculty because of his continued work for the program. He challenged the termination in federal court (Trister v. University of Mississippi) and won on the grounds that the university had unconstitutionally singled out for adverse action his representation of “clients who tend to be unpopular.”

He returned to the law school to teach part-time, continuing his work as Executive Director of North Mississippi Rural Legal Services. He significantly expanded the reach of new civil rights statutes and case law, helping to accelerate school desegregation and to increase access to public benefit programs for low-income people.

He continued his civil rights and anti-poverty work when he moved to D.C, in 1970 to join the Washington Research Project which became the Children’s Defense Fund, where he served as Vice-President and General Counsel. I first met Mike when we co-counseled on several cases while I directed Michigan Legal Services. Mike began the private practice of law in 1976. He was asked by Tom Ehrlich, the first President of LSC, to head up the Next Steps planning process in 1977, a broad inclusive planning process that included hundreds of lawyers, directors and clients and resulted in the publication of NEXT STEPS FOR LEGAL SERVICES. That initiative led to the Support Planning Process and the expansion of state and national support.

In 1981, at the request of Dan Bradley, second president of LSC, Mike and his partner Steve Cole drafted for LSC a lengthy memorandum that laid out the arguments for the continuation of LSC and thoroughly rebutted the assertions of the Reagan Administration that sought to eliminate LSC. That memorandum created the framework that LSC and the ABA used in securing the survival of LSC. His work directly on behalf of the legal services community continued in 1983 and 1984, when he and I represented state support centers in litigation brought by the national support centers to successfully invalidate a regulation adopted by the Reagan appointed LSC board to limit the work of both state and national support centers.

For over 40 years, Mike represented a broad range of progressive advocacy, labor, charitable and political organizations as well as grant-making foundations on tax, campaign finance, election law, lobbying and general non-profit corporate matters. These included the Center for Law and Social Policy and the National Legal Aid and Defender Association.

“The lesson I’ve learned, and tried to incorporate into my practice for all these many years, is that the role of the lawyer is to assist social movements. It is to build social movements, not to replace them.”

Countless progressive leaders and grassroots organizers across the country have Mike to thank for their knowledge of the laws they navigate and their consequent ability to achieve social and political change. The legal aid community has Mike to thank for his major contributions to our vision of equal justice for all and to the strength of our key institutions.