Incorporator and president of Legal Services of NJ. Nationally, chaired influential Project Advisory Group (PAG) in the 1970s, and led on IOLTA and development of LSC performance criteria. 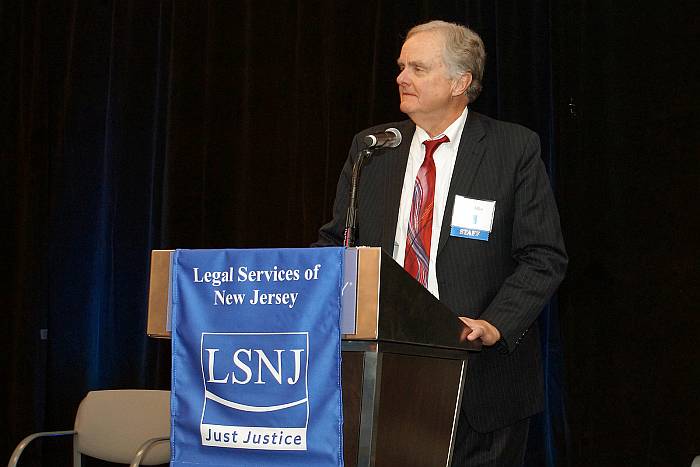 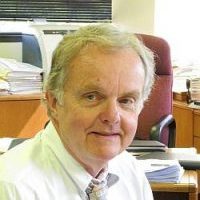 De grew up in Basking Ridge, New Jersey, and was president and valedictorian of the first graduating Ridge High School class in 1962. He attended Amherst College, graduating in 1966.

After attaining his JD from Harvard Law in 1969, he fought as a social justice warrior for over 50 years, critically helping to incorporate Legal Services of New Jersey in the early 1970s, and continuing as the only President and Chief Counsel for five decades, until retiring in the summer of 2020. Although retired “on paper,” De continued to be heavily involved in the work that was such an integral part of him, and he worked tirelessly to help the disenfranchised of New Jersey.

During his tenure as President of LSNJ, he achieved numerous awards and accolades, including the prestigious Award of Excellence from the Thurgood Marshall College Fund in 2008.

Documents from memorial service and celebration of life

The death of the man who led LSNJ for five decades as its President and General Counsel was announced Wednesday by current LSNJ President Dawn K. Miller. She informed the LSNJ and statewide staff of the passing of the man who was one of LSNJ’s incorporators back in 1971, was instrumental in establishing the statewide Legal Services system that exists today and, until last year, was the only CEO LSNJ ever had.

“There are no words that will adequately describe the pain and profound sorrow we are all feeling,” she said about the man widely known as De. “He has been the backbone of our organization since its inception, and he certainly has left a remarkable legacy of helping the poor in our state. It was his lifelong focus. It is a legacy that we will embrace and continue to grow in his honor. His visionary leadership and unparalleled achievement on behalf of the Legal Services community and low-income clients in New Jersey has been conducted with brilliance, courage, creativity, commitment, and a relentless pursuit of justice and desire to improve the lives of the poor. He will be sorely missed.”

That legacy is documented by the rollout of achievements and hard numbers during his days at the helm of LSNJ and its five regional offices across the Garden State. During those more than 50 years Legal Services has provided free legal representation in more than 2.6 million civil legal issues involving some 9 million poor New Jerseyans.

Cynthia M. Jacob, chairperson of LSNJ board of directors, said the message that Miller brought home to New Jersey resonates: “He made New Jerseyans far better understand the depth and consequences to the poor of our state. And he was a dogged fighter to that end. In short, he cared. His passion for Legal Services and its clients was all consuming, second only for his love for family.”

She noted that, through all the funding challenges for Legal Services “De Miller stood fast as a stalwart in keeping Legal Services afloat in hard times and maintaining the most crucial services the impoverished and others need. He never gave up even in the hardest of times.”

In that regard, his own words when he announced he was stepping aside as LSNJ president¸ tell the story. “At some point I trust Legal Services of New Jersey ultimately will lay out a meaningful roadmap for public officials to deal with poverty and the horrendous impact it has on generations to come.”

In fact, the LSNJ Poverty Research Institute, a unit which was created under Miller’s guidance, has been in the process of developing a series of data-based reports designed to spotlight how poverty has steadily increased in one of the wealthiest states of the nation, reaching the point that there are some 3 million New Jerseyans in what Miller defined as “true poverty” or those essentially living daily lives of “deprivation.”

Miller, 76, a resident of Tewksbury, was predeceased by Louise, his wife of 48 years, and leaves behind his three children…. His family meant the world to him…. He helped create or assist anti-poverty organizations outside LSNJ, and was a prolific writer, authoring “You and the Law in New Jersey” in 1988, and many other publications. He argued before the New Jersey Supreme Court on a number of occasions, and served on many judicial committees providing recommendations and advice to the court on possible policy changes and emergency situations, including, for example, tenancy and foreclosure issues affecting tens of thousands of New Jersey residents. In recent weeks, he had told colleagues he believed that many of the problems affecting people of color and poor residents during COVID-19 surfaced and intensified because those same underlying issues had not been dealt with adequately in the past.

The 1969 Harvard Law School graduate served on numerous national and state committees and organizations. He was the recipient of many awards, including the prestigious Award of Excellence from the Thurgood Marshall College Fund.

Word of Miller’s passing brought comments from many in the state’s legal circles.

“De was a good man, a good leader, a good lawyer and an inspiration to so many. His motto to new lawyers: Do well…and do good.”

“His insight, commitment to people in poverty and legal acumen were unmatched in New Jersey and the country.”

“De was a giant in his field and a fundamentally decent person. The loss is tremendous and will be felt deeply by the State and by all who knew him personally.”

“His impact on the legal landscape and community in New Jersey will live on forever.”

Melville D. Miller Jr., died March 3. He was 76. De was a giant in civil legal aid. He was a national and state leader, a visionary, and a craftsman of seminal civil legal aid documents.

He founded and developed Legal Services of New jersey, perhaps the most comprehensive and integrated civil legal aid system in the country. Today it employs a staff of about 600 from its headquarters in Edison and its five satellite offices that serves indigent clients in all 21 counties in New Jersey. For a history of Legal Services of New jersey see
https://www.lsnj.org/50/50%20Years%20Advancing%20Justice.pdf

Miller also helped launch the LSNJ Poverty Research Institute, which publishes data and analyses of poverty in New Jersey. The institute’s work was especially important to him because it “educated the public about what poverty actually meant to real people, and what people in poverty are going through,” said Claudine Langrin, LSNJ’s executive vice president.

Among the many tributes to De from New Jersey, State Supreme Court Chief Justice Stuart Rabner praised Miller for dedicating his life to “helping people who desperately needed legal assistance they could not afford.” “Through his professionalism, passion, insight, and integrity, he made a meaningful difference in countless lives,” Rabner said. “He inspired us all.”

When De stepped down as President of LSNJ in 2019, he remained involved in the research institute’s work, as well as representation to prevent children from entering foster care.

On the national level, De chaired the Project Advisory Group (PAG) in the mid-70s, expanded its representation and made it into the main advocacy group that focused on funding distribution and regulatory issues at LSC. PAG under De’s leadership also influenced other critical LSC policies.

ln 1991, he led the development of the LSC Performance Criteria and was its principal draftsman. He also continued that role for the 2006 revision of the Performance Criteria. These are used both by LSC and other funders to evaluate civil legal aid programs and to provide the framework for funding competition.

De also was a chief advisor to Doug Eakeley, the LSC Board Chair during the Clinton Administration, Doug had been the Board Chair of LSNJ previous to his role at LSC.

De was also involved in the development of the national legal needs study conducted by the American Bar Association and a key member of the Advisory Committee to the study.

De also was also a leader in IOLTA issues in New Jersey and nationally and was significantly in efforts to require financial institutions to insure interest rates be both reasonable and comparable.

For an early oral history with Dee, see:  https://legalaidhistory.org/oral_history/miller-melville-1990/

De has received many awards for his service and contributions to civil legal aid, among them was the 1987 Reginald Heber Smith Award from NLADA.