Seminal figure who with his wife Jean Camper Cahn authored landmark 1964 article for the Yale Law Journal proposing national system of legal services to the poor. He founded Antioch School of Law and Time Bank. 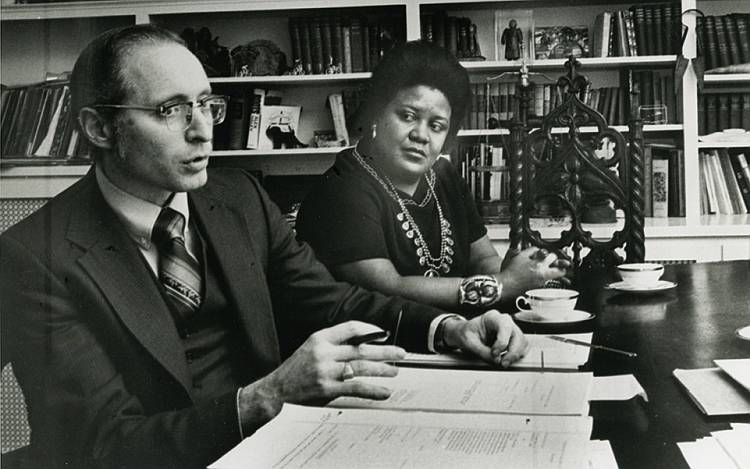 Edgar Cahn earned his B.A. from Swarthmore College in 1956, and his M.A. and PhD in English literature from Yale University in 1960. While at Swarthmore, he met Jean Camper, the daughter of Dr. John E. T. Camper, a prominent African American physician in Baltimore who had founded the city’s first chapter of the NAACP. The two married, and Edgar Cahn eventually followed Jean at Yale Law School (she graduated in 1961 and he graduated in 1963). Cahn’s involvement with legal services started during his first year of law school, when he worked as an intern for the Department of Health, Education, and Welfare (HEW). During his second year of law school, he worked as a speech writer for Robert Kennedy and Lyndon Johnson. Jean Camper Cahn was working as associate counsel for the Redevelopment Agency in New Haven and was asked to draw the corporate papers for the Community Progress Inc., a community development organization funded by the Ford Foundation that undertook the development of different neighborhoods. The Cahns’ work on legal services in disadvantages communities and on neighborhood law offices formed the basis of their landmark 1964 article for the Yale Law Journal, “The War on Poverty: A Civilian Perspective,” which proposed a national system of legal services to the poor. The article, which they discussed extensively with Gary Bellow, provided an important foundation for the creation of the federal legal services program under Sargent Shriver. The OEO funded program was replaced in 1974 by the Legal Services Corporation. In 1972, the Cahns founded the Antioch School of Law in Washington, DC, which emphasized public interest law. The school used a clinic education model to train students. Students spent the first two weeks of the school year living with a poor family to familiarize themselves with the people they would be representing. The school was closed in 1988, but its legacy continues at the University of the District of Columbia’s Clarke School of Law where Edgar Cahn is Distinguished Professor Emeritus. Jean Cahn died in 1991 from breast cancer. She continued to teach and practice law until her death. Edgar and Jean Cahn were pioneers in legal services and clinical legal education. Together and individually they helped shape the field of legal services as we know it today. Edgar Cahn founded Time Bank. Time Banking was conceptualized by Edgar while he was a fellow at the London School of Economics in 1987. Members of Time Bank earn Time Dollars for each hour they perform a community service. Some of these services include child care, helping students with homework and running errands for elderly neighbors. These dollars are then “banked” and can be exchanged for items or services by other members of the Bank. Some members can earn college tuition or a service such as yard work.

The equal justice community lost one of its most important voices with the death of Dr. Edgar Cahn on January 23, 2022. In both his words and actions, Edgar embodied the principle of community empowerment and understood the importance of the role of legal services in building a more equitable society.

Edgar was a visionary writer and activist who, in 1964, along with his wife Jean Camper Cahn, published the seminal article that led to the creation of federally-funded legal aid for the poor. “The War on Poverty: A Civilian Perspective,” published in the Yale Law Journal during the developmental stages of President Johnson’s War on Poverty, provided a blueprint for what became first the OEO Legal Services Program and, eventually, the Legal Services Corporation.

The article provided a comprehensive roadmap for the development of a national infrastructure of “neighborhood law firms,” using the law to address the root causes of poverty as part of the broader national initiative. It was breathtaking in its insight and comprehensive in its scope, with a remarkable vision that remains totally relevant to today’s access to justice movement.

Most importantly, it laid out in enormous detail – in terms and values that guided Edgar Cahn’s entire professional career – the importance of the client’s voice and involvement in how these law firms would operate and engage with their communities. The following quote from the article is illustrative of the Edgar’s distinction between the “military” concept of the War on Poverty and their “civilian perspective:”

“The ultimate test, then, of whether the War on Poverty has incorporated the “civilian perspective” is whether or not the citizenry have been given the collective power to criticize, to dissent, and where need be, to compel responsiveness.”

No longer would the system sanction the “silence of the poor.”

Edgar graduated from Yale Law School in 1963 and started a career in government as special counsel and speechwriter for Attorney General Robert F. Kennedy. In 1964 he penned a landmark speech by the Attorney General at the University of Chicago in which he urged law firm partners and associates to engage much more systematically in pro bono efforts serving the disadvantaged. He next served as the Executive Assistant to Sargent Shriver, working on poverty issues in the newly created Office of Economic Opportunity (OEO), where along with Jean he was able to work on turning their vision into reality, with Jean serving as the founding director of the National Legal Services Program in OEO. Given subsequent political challenges at the federal level, this office eventually led to the creation of the independent Legal Services Corporation.

After leaving government work, Edgar established the Citizens Advocate Center, initially focused on ensuring that the voices of Native American communities were heard and represented. In 1969 the Center published “Our Brother’s Keeper, the Indian in White America,” in conjunction with a number of Native American activist groups. The collaboration led to significant gains for tribal sovereignty and self-determination.

Edgar and Jean went on to co-found the Antioch Law School, dedicated to training lawyers committed to serving low-income and disadvantaged communities. The law school not only created a sense of mission and camaraderie within the students who studied there, it also pioneered the concept of clinical legal education in the United States. When, for financial reasons, Antioch eventually transformed into the David A. Clarke School of Law at the University of the District of Columbia, Edgar remained a critical leader of the institution, serving as Distinguished Professor Emeritus. The new law school incorporated Antioch’s curriculum and faculty.

In 1987, as a fellow at the London School of Economics, Edgar, in keeping with his community-centered roots, came up with the concepts of Time Banking and Time Dollars. The TimeBanks movement linked the unused skills and talents of communities by allowing people to earn TimeDollars by providing critically-needed services, such as child care, tutoring, and elderly assistance, and “banking” them for exchange with other members of the TimeBank for other needed services. The movement continues to grow (TimeBanks.Org) and stands as a monument to Edgar’s vision of the power of communities to take control of their own futures. His vision of co-production, and strategy for social change, essential to the TimeBanks movement, was laid out in the publication of “No More Throwaway People.”

Edgar was also a great friend and supporter of NLADA. He worked closely with the Association on many initiatives and trainings aimed at ensuring that the voice of the client community was at the heart of the work of NLADA and the civil legal aid community. He also provided personal financial support for a series of prestigious NLADA cash awards recognizing the enormous contributions from client leaders across the United States. According to NLADA Vice Chair Rosita Stanley:

“Edgar was an extraordinary leader and supporter for people who otherwise would have no voice. He was an authentic crusader for justice. I will miss him tremendously.”

In 2009, Edgar and Jean received the National Legal Aid & Defender Association’s Charles Dorsey Award for extraordinary and dedicated service to the equal justice community and to organizations that promote expanding and improving access to justice for low-income people.

Jo-Ann Wallace remembered her many interactions with Edgar while she served as President & CEO of NLADA:

“Edgar was a brilliant, accomplished justice strategist who believed that every human being on this earth has worth and any effort he undertook was dedicated to finding new ways to translate that belief into the fabric of society. It was an honor to have had the opportunity to work with him on various projects aimed at finding novel ways of bending the arc further towards justice and equity. His passing has left an indescribable void, but his life and teachings have left an indelible legacy that has never been more important to activate.”

“As a new attorney, I recalled meeting Edgar for the first time at UDC law school. He fascinated me in so many ways as I learned about his work. He was Bobby Kennedy’s speechwriter, and he remained humble. He created the world that we wanted to see through TimeBanking and the Time Dollar Youth Court. His legacy of fighting against injustice while also creating a new world that embodies our ultimate values is one that I hope to continue in his honor at NLADA. The world and NLADA are better places because of Dr. Edgar Cahn.”

The life of Edgar Cahn stands as a towering example of what one person (or, in Edgar and Jean’s case, two people) can accomplish with a clear vision and commitment to improving our society and our institutions. All of us in legal aid and the equal justice movement owe Edgar an enduring debt. We should find constant inspiration in traveling the path he laid out so clearly for us.